From developer studio Square and directed by Hiroyuki Ito, Final Fantasy IX is the last mainline entry Hironobu Sakaguchi created and produced. It marks the end of Final Fantasy on the PlayStation before the franchise would continue in the PS2 era. This review is based on my playthrough of the game on the Nintendo Switch. 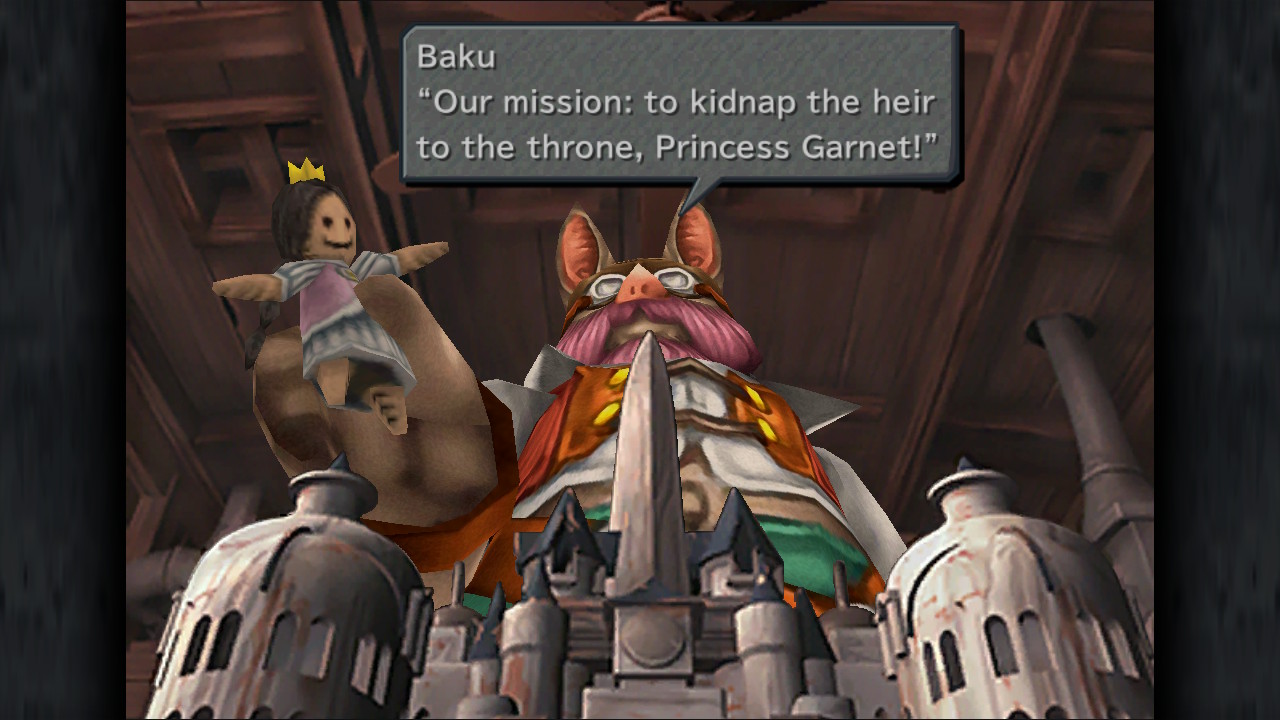 To Kidnap a Princess 101

In FFIX you play as Zidane, a member of a group of thieves called Tantalus who have entered the kingdom of Alexandria to conduct a secret plan: kidnap the princess. To this end, the group enters under the guise of a traveling play troupe. To their surprise, it turns out the princess wants to be kidnapped! In the course of the journey thereafter, Zidane enters an uneasy alliance with various allies, such as a knight some would call too serious, a young but powerful dark mage, and a budding summoner.

Together, the group will need to keep their wits about them as Brahne—the queen of Alexandria—plots nefarious deeds behind her facade. The sinister plans she has in store for the other three great nations of Gaia takes them to myriad locations around the world in order to uncover why Queen Brahne is resorting to such methods. Along the way, our crew is tested on who they are and their place in the world, as the internal struggle of duty versus the search for truth rages on.

An interesting feature Final Fantasy IX includes that the other entries lack is the Active Time Event. Clicking the “minus button” on the Switch swaps perspectives with another character in your main party and shows what he/she is currently doing. This shows you an interesting look into what your other party members are doing, fleshing out their personality and interests. These little glimpses of their day-to-day interactions with others outside of the main party serves to heighten the characterization and ends up making you like the cast even more than you already did.

Back to the old school formula

The gameplay is a mix of exploring the world and battling the enemies within. Battles take place in an active time battle (ATB) system where your party of four has to input commands like “attack” “items”, “spells”, and so on. In other words, the standard turn based battle system we all know and love. You can only attack when your ATB gauge is filled, but can switch the options from “active” to “wait” to give yourselves more time to pick your commands. Choosing the “active” option makes enemies continue their turns even if you’re still busy going through the menus.

You can only enter battles with enemies in the overworld—the world map you traverse through—and during dungeon segments. You don’t see any monsters out in the wild, but encounter them in random battles after a set amount of time you spend traveling in dangerous areas. In between battles, you and your party can explore towns and listen to NPC dialogue, or even stumble upon a sidequest or minigame.

What Final Fantasy IX does differently is how the equipment gives the players options for new abilities. What this means is that every time you gain a piece of equipment—be it weapons, armor, or accessories—you can gain the abilities within that item permanently, as long as the item matches the character-specific class.

Action abilities are one of the two abilities you can equip and show up as either magic spells or special moves your character can use, provided you have spare mana points to use them. Support abilities are like passive abilities, where they are always active as soon as you enter a battle. A support ability may provide extra damage towards a certain type of enemy, complete resistance to a certain type of status effect, more hp, and so on. There are also unique support abilities worth getting as long as you can stomach the high magic stone requirements. Magic stones are a resource tied to each character that determine how many abilities they can equip.  Early on, you only get a small number of magic stones, but as you grow in levels you gain more.

In addition to the ATB system, Final Fantasy IX has a mechanic where whenever enemies attack your party members, a trance gauge will fill up below your character’s ATB bar, similar to the Overdrive or Limit Break gauge in other titles of the series. When filled, your party member undergoes a visual transformation, an increase in stats, and can then use a new set of abilities or skills for a limited time. Each party member has unique abilities available, like Vivi who can use double black magic spells.

I found the Trance addition to be a hit or miss, since you can’t have the agency to control when they activate without your input, even though it lasts for several rounds. Not being able to activate it when you want can be annoying, but that said, I do like how the system powers up the characters and gives them unique skills. Plus, the visual upgrade is just plain cool.

I found the return to the roots of the series with the medieval setting to be a great choice. It’s exactly what I wanted from a Final Fantasy game after FFVI, and the art direction is just superb. It takes the lessons Square wanted to implement with the rough 3D polygons from FFVII and mixes it with the semi-realistic character design from FFVIII. It brings to life gorgeous settings from incredible castles to steampunk cities, with a cornucopia of geographical terrain coupled with breathtaking art background while exploring. Even the backgrounds during battle screens are pretty awesome to look at. Whenever I would enter a dungeon the art would immediately pop, as my eyes tried to take it all in.

Initially, I found the character designs weird considering I was used to the realistic human proportions from FFVIII. But as I played more and conversed with each NPC I found myself growing to adore the different races in the game. I would say the enemy designs are also top-notch; managing to look menacing while still retaining the classic final fantasy look. Spell animations are serviceable and while not as bombastic or as flashy as its predecessors, I was still pleasantly surprised at how much the game managed to pack.

I’m not angry, this is just how I always look

Composed by Nobuo Uematsu, the soundtrack is impressive as he manages to sneak in various leitmotifs reminiscent of past Final Fantasy games. It navigates the entire musical spectrum, with tracks that can move you, tracks with upbeat tones that border on humorous, and relatively tranquil town themes. Orchestral tracks hit high ceilings following the battle tracks, giving off a feeling of invincibility. The woodwind instruments, particularly of flutes in conjunction with the piano and violins, transport you into a world where classical instruments reign supreme. In contrast, it can even surprise you with synthesizers in special locations. There’s loads of nostalgia within the music, guaranteed to put a smile on any FF veteran’s face.

I feel the soundtrack fits quite well with what FFIX tries to convey. It’s not overtly serious, nor is it trying super hard to be funny. There’s a fine line Nobuo Uematsu grabs and holds steady throughout. The weighty tones that can be found in between can surprise anyone who comes in expecting a childlike game. Each track plays with a unique purpose in mind, and some tracks only play once in the entire game! It goes to show how dedicated the composer is to creating unique tracks for each segment in the game. With tracks for exploration, normal battles, boss battles, cities and towns, character themes, it’s got it all.

Performance-wise, the game only crashed while grinding in the overworld after turning on high-speed mode and auto battles, and once in the final boss dungeon area. In total, there were about six crashes in my playthrough. Not a major dealbreaker, but something to keep in mind. Always remember to save frequently!

During one section of the game, I had to grind my other members to have a decent chance of surviving and moving onto the next zone. While this didn’t annoy me greatly, the game would have benefited from an exp share system with reserved members while they’re not in combat. I had to grind for over an hour to get a respectable amount of levels. I had to do so again before the final boss because I just couldn’t defeat it otherwise. As JRPGs go, how much you may need to grind depends on you, so your mileage may vary.

I found the experience of gaining levels and magic stones, alongside maxing out the equipment to learn action and support abilities to be very enjoyable. It’s satisfying looking at each ability page and picking what abilities you want to equip before a fight occurs. Or when a particular boss annoys you with status effects, time to equip some abilities that negate them! It’s an enjoyable gameplay loop. My only gripe about the battles is just how slow battle transitions are. I went back to the previous games before FFIX and counted how many seconds it took to transition into the battle screen. FFIX ended up doubling the others, taking about 11 seconds. There is an option to skip battle loading in the options menu, which does help mitigate the effect somewhat. It’s still fun, just be ready to have to wait before you can dive into battles.

I appreciated the role each character in your party had, and it reminded me a lot of FFVI. It provides a mix of the old system while still allowing your characters to grow within their specific roles. Like with Vivi being a black mage specializing in destructive power, or Zidane’s focus on thief skills making him invaluable to stealing items from enemies. It is also viable to utilize every member of your party to some extent to defeat some challenging bosses. The game isn’t balls-to-the-wall hard, but it does provide a modicum of difficulty forcing you to change up your regular tactics and use all the tools you have to prevail.

I did not enjoy the card game, Tetra Master, especially when they made it essential to the plot later in the game when I wasn’t interested in it. The game also does a poor job of explaining the mechanics of it, making me have to resort to a guide online for a better breakdown. This minigame just wasn’t for me.

As for the story, I’d say it’s a classic through and through, with story beats that won’t fail to pull on your heartstrings. While I do still have some reservations about the game—particularly some parts of its combat system and some minigames—as a whole, the story, graphics, and music more than make up for any small shortcomings the game has. While it plays what some may call the safe card in its classical story, it isn’t afraid to tread new grounds. The way the game approaches these areas is where the diamond begins to shine even brighter.

Developed by Square, directed by Hiroyuki Ito, composed by Nobuo Uematsu, and produced by Shinji Hashimoto and Hironobu Sakaguchi, FFIX is like a lasso over my whole body slowly pulling me into a world of joy, laughter, and some other surprising emotions.

For its highly fleshed out and lovable characters, a solid soundtrack full of classical instruments and clever usage of leitmotifs, and a story worth seeing from beginning to end, I give Final Fantasy IX a 9.5/10. It feels like a love letter to veterans of the franchise, yet is still a remarkable game in its own right for any newcomers wanting to try out their first JRPG.

View all posts by Emil