Kingdom Hearts the incredible offspring of two beloved franchises,  becoming a triumph of creativity and design, which at the time started as the idea of series producer Shinji Hashimoto and Final Fantasy creator Hironobu Sakaguchi to create an open world game with the likes of Super Mario 64, an idea that sounds amazing when such big names in the industry are involved but the reason why games like super Mario 64 and others of the same likes succeeded was because they had iconic faces on the cover, that even the smallest of countries could see and recognize. This is why Kingdom Hearts worked so well, a simple hello inside an elevator between Hashimoto and a top executive at Disney, that then became a conversation which led to the pitch of what would be soon to become one of the world’s most beloved franchises and a cultural phenomenon, that gave birth to 10 games in the last 11 years including several spin offs and HD versions.

Kingdom Hearts released in 2002 for the Playstation 2 and becoming the #10 most sold game on the system leaving on its name on video game history. Directed by, at the time one of Squaresoft’s if not their biggest game designer Tetsuya Nomura, a man known for his work in multiple Final Fantasy games that took the role of both director and character designer for the game, fusing both his amazing drawing style and crazy sense of fashion into a world full of magic, adversity and adventure.

After hearing Simple and Clean for the first time, the game starts in Destiny Island, which at first glance may remind many of Final Fantasy X, with all the beach, ocean shots and overall very relaxed atmosphere. (Not to mention Tidus and Wakka from said game.) Kingdom Hearts opens to innocence with our protagonist Sora and his best friends Kairi and Riku that live on the island together and dream about exploring the world far beyond their reach to see what’s out there.

They come up with a plan to travel outside the island but, as all things imagined it, destiny has bigger plans for the trio and darkness is quick to arrive at Sora’s doorstep, stranding him in an unknown world without his friends, in the possession of a powerful weapon called the Keyblade and a quest to find them. Many characters from both Disney and Final Fantasy appear to aid Sora in his adventure but so do many others who mean to stop him as he travels from world to world in search of his friends, not knowing life has more planned to him than meets the eye..

When it comes down to kingdom hearts we’ve come across an ARPG that blends  the essence of both Final Fantasy, with its use of magic spells such as Firaga, Thundaga and Curaga combined, with the combat and mobility of per say like The Legend of Zelda. This was truly an ARPG done the Squaresoft way. As surprisingly good as it sounds, it has aged and what once felt like a fun and thrilling adventure to some has now turned into a bag of puzzling hell, slow combat and movement that feels really heavy. I can’t really hate it too much knowing that it was a first for the game’s director and a subgenre Square hadn’t talked a lot in the past, at least not in the way Kingdom Hearts did it. For many the combat in Kingdom Hearts may be a reason to quit the whole series but it doesn’t stay slow forever.

As the game keeps progressing, our character keeps evolving and learning more abilities that enhance the gameplay heavily, you go from three basic grounds attacks to a barrage of Keyblade wings at the enemy at incredible speed. The game does feel heavy and no, it’s not because of Sora’s massive shoes… in all seriousness, fighting bosses or really fast enemies may become bothersome thanks to how slow the movement is compared to later entries in the series. However, it’s not the type of slow that will make you drop the game instantly, it’s the type of slow that is will teach you that swinging your Keyblade like a monkey isn’t enough. You need to learn to time your blocks, use the right magic, and use your environments to cover or gain an advantage over your enemy. Overall not the series strongest game in terms of gameplay but still good enough to enjoy the game till the very end.

One of Square’s greatest and strongest attributes has always been their amazing soundtracks, bringing top tier talent into their games and telling stories that go hand to hand with beautiful tracks. 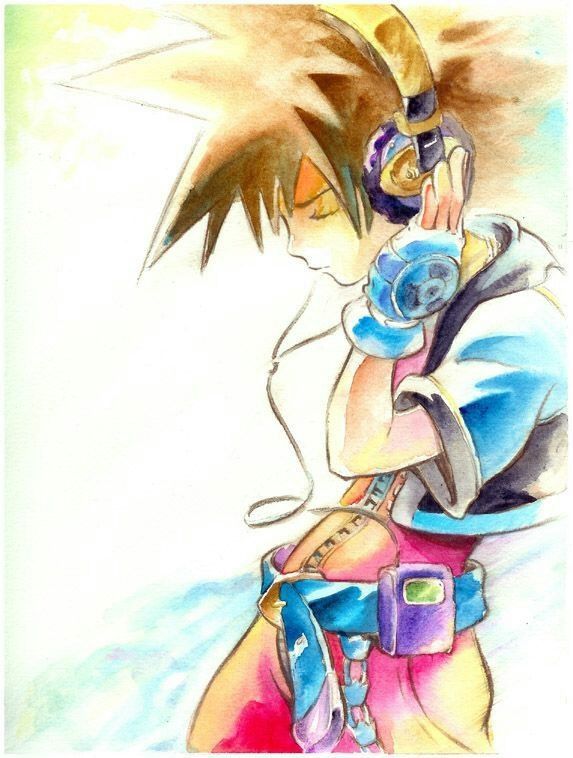 Kingdom Hearts was no exception! Filled with the outstanding work of series composer Yoko Shimomura, mixed with the help of big names like Kaoru Wada, who helped orchestrate the opening and credits song with the New Japan Philharmonic Orchestra, and the incredible vocals of Hikaru Utada, were all the perfect mix of talent and passion that brought a delight of both original songs and rearranged Disney songs into Kingdom Hearts. Going from tear jerking songs like Dearly Beloved and Destati to heart pounding tracks like Shrouding Dark Cloud and End of The World, Kingdom Hearts soundtrack is one to be remembered for years to come.

Leaving everything aside, the truth is Kingdom Heart is a great game, but like any other it has issues and design choices that sadly didn’t age well. After all, we’re talking about a 16 year old game! Certainly a hit of its time but it’s not the best the series has to offer. The combat is clunky at times, running pretty slow, and the story itself being really confusing at times could leave you scratching your head. Kingdom Hearts has a charm that attracts many into its universe and certainly a game any SquareSoft/Enix fan, or just a jrpg enthusiast in general, need to try at least once. Funny enough while writing this review, I found myself remembering how much the game helped me get through hard times in my childhood, where games like Final Fantasy tell amazing stories but usually approaching it in a more serious way, Kingdom Hearts drags you into a world of adventure and dreams while also telling you an amazing story in a more lighthearted way. The fight of light against Darkness, the mission to save your friends and return home, and the struggle to overcome the odds set by destiny are what make Kingdom Heart an unforgettable game. Born from fate and created with passion, Kingdom Hearts is easily a game that deserves to be tried at least once.