Octopath Traveler is a JRPG by Square Enix released exclusively for the Nintendo Switch. It stars 8 characters on their own unique journeys, seen above. Ophilia the Cleric(dressed in white), Olberic the Knight(dressed in blue), Therion the Thief(dressed in purple), Primrose the Dancer(dressed in red), Tressa the Merchant(the character with a hat), H’annit the Huntress(the girl in the background), Alfyn the Apothecary(the boy in the background chewing on a stem), and Cyrus the Scholar(dressed in pure black). The game was released worldwide July 13th, 2018.

It’s hard to describe Octopath’s plot because… there really isn’t one. Each character has their own story, so I’ll give a quick summary of each below.

Therion, after being forced to put on the mark of shame, a bracelet that marks one as a thief, has to collect four ancient artifacts, the dragonstones, so the family that the dragonstones belong to will remove the bracelet.

Ophilia, after her adopted father becomes sick, chooses to perform the journey to light the sacred flame in each holy town instead of her adopted sister, Lianne, who chooses to watch over their father.

Cyrus, after being expelled from the academy where he taught after being accused of an affair with the princess, searches for an ancient tome which is said to include knowledge of dark arts like necromancy.

Olberic, a bodyguard for a king who left his duty after his liege was killed by Earhardt, a man he once called an ally, goes on a journey to discover the reason he still wields his sword and to make Earhardt answer for his crimes.

Primrose, a daughter of a noble who was assassinated by men with crow tatoos, vows to hunt down those men, using her skills she obtained after a childhood of being adopted into a house of dancers to obtain revenge.

Tressa, the daughter of a merchant couple, goes on a journey to discover the world after discovering an incomplete journal that marked a traveler’s journey across the world.

Alfyn, a kind apothecary, is traveling around the world to heal people like the man who saved him from near death for no cost when he was a small child.

H’annit, an apprentice hunter to a master hunter, Z’aanta, goes on an adventure after Z’aanta does not return from a hunt he said would be difficult, where he went to hunt the dangerous creature, Redeye.

The stories don’t really tie in to each other until the end point, where they lead up to a final dungeon and boss shared by all the characters. Each adventure has its own dungeons and NPCs, though occasionally after an event happened in one of the stories, “Travel Banter” would happen between a few characters in your party. This system is similar to skits in the “Tales Of” series, where a group of characters talk about a recent event. These banter sequences are some of the only times the characters interact. It’s a shame that this banter only happens between who is in your party of 4, even if you have every character waiting back at the tavern.

Combat is your standard turn based affair, with a few gimmicks here and there.

The most unique thing about it is the break system and boost system. If you hit an enemy with a weapon/spell theyre weak to, their shield amount will go down(seen above). When that shield hits 0, they’ll be in a break state where they will be stunned for a turn and attacks do double damage. This adds a layer of strategy, as breaking an enemy or boss while they are charging up attacks makes them cancel that attack, or if you are low you could also break them to have a breather and heal up. The break system also ties in with the boost system. Every turn, you will obtain a boost point, or BP(seen above hp bar above). You can save up to 5 BP. When you hit the R button, you will “boost”. This has varying effects on various techniques. Skills and Spells will gain boosted damage, buffs and debuffs will last longer, heals will heal more, and if you boost a normal attack you can increase the amount of attacks you hit. You can boost up to 3 times, allowing for a total of 4 hits, so theoretically you could break a 4 shield enemy in one turn. If you boost a previous turn, you wont gain BP the next turn, and if your HP hits 0 you lose all BP.

Theres also the Job system. See, each character has a job. Each job has its own skills and passives. You unlock new skills and passives with Job Points, or JP, that you obtain at the end of battles. After a certain point, you can unlock sub jobs. For example, I can give Olberic the Knight the subclass of Thief, allowing him to steal. Or Primrose the Dancer the subclass of scholar, allowing her to use strong spells. Each job has their own skills, spells, and weapon types they can equip, for example, only the Dancer can use dark magic and only the Scholar and the Cleric can use staves. When you equip a subclass, you gain access to all those skills, spells and equips of that class. It gives an extra layer of strategy, making you organize your party makeup so you’ll be able to hit every weakness with every party, considering you have a party size of 4 with 8 total characters. Fortunately, you can switch characters in your party at any time at a tavern.

Each character has their own talent and path action. Unlike spells and equips, these aren’t included in subclasses and are unique to each character. Each path action has a noble and rogue variation for the same purpose. For example, Therion has the rogue path action of obtaining items, Steal, where he can steal from NPCs, while Tressa has the noble version, purchase, where she obtains items by buying from NPCs. The difference is that rogue is based off percent(Therion has a 10% chance of stealing a Golden Axe) while noble is level based(Tressa needs to be level 35 to buy the Golden Axe). Don’t worry if you want to be a rogue though, percent goes up with level. Like mentioned earlier, talents are also a mechanic. These don’t have noble and rogue actions and are just unique. Some are in battle, some are not. Therion can lockpick purple chests, which no one else can open. Cyrus automatically learns a weakness of an enemy when he enters a battle with them. Olberic can boost his defend command, and take damage for other party members. The list goes on. These two mechanics make all the characters feel very unique and useful, making everyone useful to bring along.

The graphics in Octopath are absolutely tremendous in my opinion. While everything is pixelized, the pixelized objects are incredibly detailed and colored. The particles are bountiful and beatiful. In battle and in the overworld, everything is animated, and overall the game just has a fantastic level of polish.

The music is very good as well. Especially the battle themes. The battle theme might just be the most important part of a JRPG, considering you hear it so often. And this game nails it. Every battle theme has a fantastically organized orchestra, and some of them have acapella and chorus. The other music is good too, matching each area and character very well, though it’s not particularly memorable.

The framerate of the game never dipped for me, and the loading screens were quick too. Not much to say here as they work well. 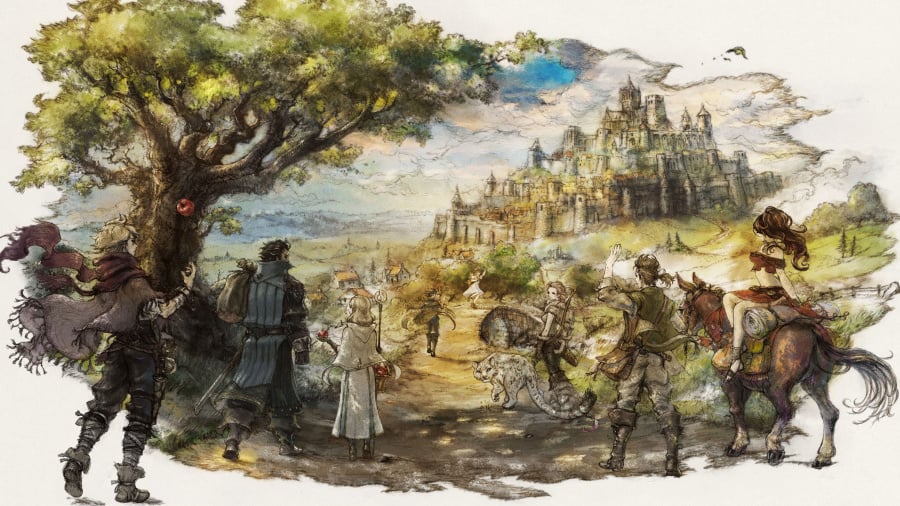 In my opinion, this is simply just one of the best and most consistent JRPGs released recently, and has quickly shot up to one of my favorite games of all time. The amount of polish and effort put into this game is simply tremendous. After the shaky opinion of Final Fantasy XV, I highly recommend those who were put off by Square’s antics give this game a go.

Score: 9/10; Some music is unmemorable and the travel banter depends on who is in your party and not your total character count. Aside from those reasons, the game is perfect in almost every way. Greatly recommended.